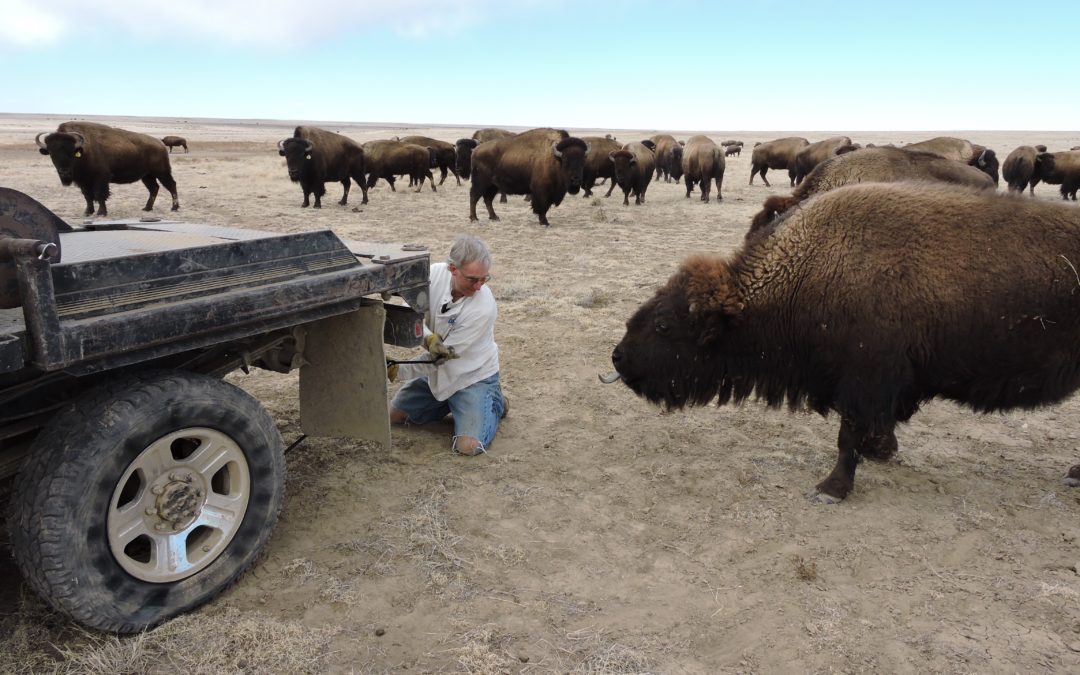 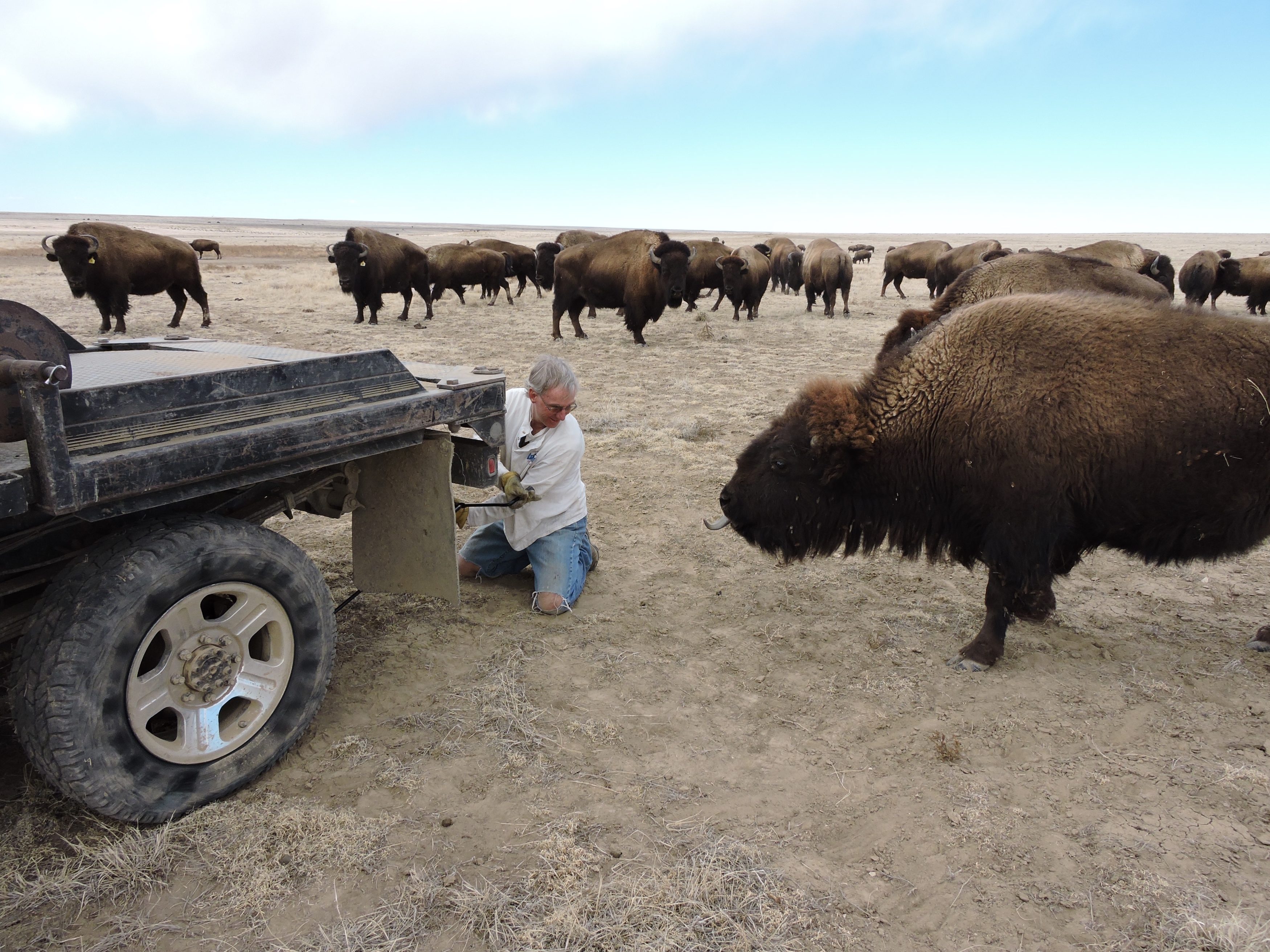 Jay changing a flat in bison country. The one sticking out her tongue is the very tame Nellie. 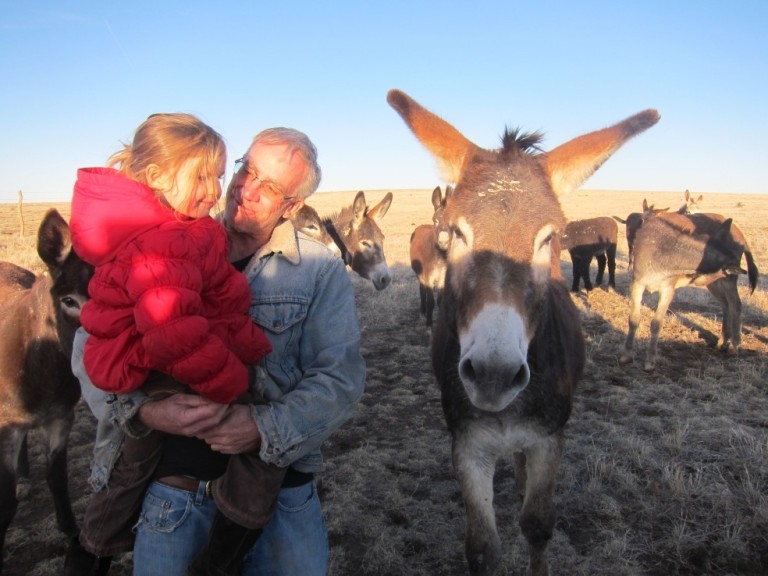 Jay giving a young visitor, Alex Wolf, an upclose view of one of our rescued donkeys (“Jack”). 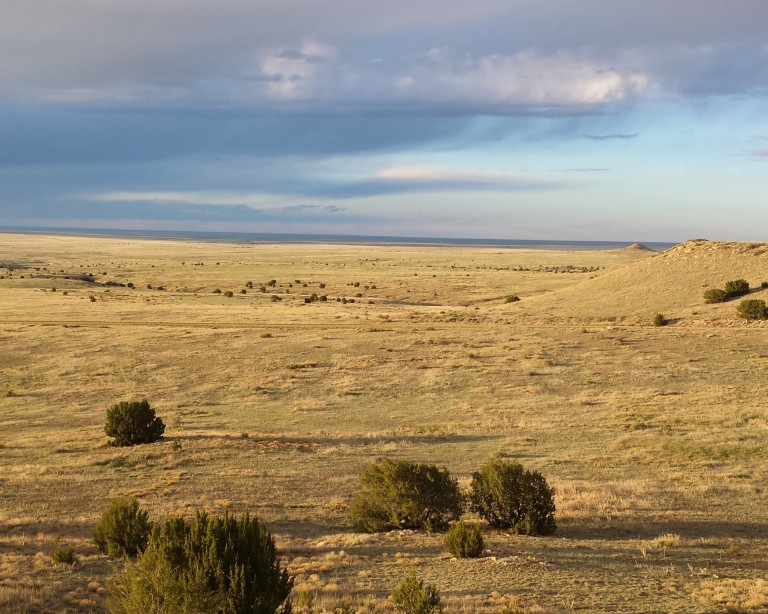 Now that I have been SPLT’s Preserve Manager for a little over a month, there is time for reflection upon my new, and curious, “SPLiT existence.” I spent the previous 27 years using the law to protect wildlife, practicing public interest environmental litigation. Environmental litigation is a desk job. You get into it because you love being outdoors in nature and want to protect what you love, and then you end up indoors, normally in front of a computer screen, surrounded by piles of documents, wading through the mental thickets of the law, and anally moving words about pages trying to arrange them in some order that might convince a judge to do the right thing. Often it doesn’t work, but sometimes it does, and you are ecstatic.

Yet, your victories are fleeting. You stop some proposal to exploit natural resources – for now – but the resources are still there, and to paraphrase the Terminator, the people who want them “will be back.” Other times, you force the government to begrudgingly convey legal protection to a vanishing species, but that protection is only as good as the government officials, currently in charge, want it to be – unless you sue them once again. All the while hoping Congress doesn’t pull the law you are using out from under your feet. Constant pressure, constantly applied, is the motto, but, in short, it can be a job for Sisyphus.

27 years is my magic number for playing Don Quixote in the courtroom. I graduated from law school in 1990. I was 27 then. It was the same year Nelson Mandela got out of prison. He had been in jail for 27 years: my entire life. At the time, I remember thinking – how was it possible that he had accomplished orders of magnitude more to advance the causes near to his heart from a prison cell than I had to advance mine while walking around free. After 27 years in the courts, I’m still thinking the same damn thing. The problem for me is compound. Being indoors all the time feels like prison, and suing people to force them to do the “right thing” is indirect, slow, and frustrating for everyone involved. Coming to work for SPLT has been my solution.

While it might seem curious that a largely urban lawyer would want to become a largely rural “ranch hand,” as Preserve Manager, I am finally back outside among the creatures that I love. No more sitting in conference rooms looking longingly out the window, and as to the management part of the job, doing the right thing for the land has gotten a lot more direct. I can’t recall how many times I sued the U.S. Bureau of Land Management or U.S. Forest Service trying to get them to treat the land with more respect for its non-human inhabitants. SPLT has cut out that annoying middleman. If SPLT thinks the land and its wildlife should be managed in a particular way – we just do it. Our goal is to show what is possible, not to argue what someone else should or shouldn’t do. If we create a place where wildlife are free to be wild and human interests don’t swallow all others, the hope is that people will like what they see and follow our lead.

My “SPLT existence” is an odd mix. Some days I’m still in Denver doing office work and visiting Starbucks, and others I’m digging stuck trucks out of the mud 12 miles from the nearest residence and eating at the Loaf and Jug. No longer do my daily challenges call for filing complaints, scheduling depositions, or moving for summary judgment. Rather they call for fixing a fence so that pronghorn can pass under it without entangling themselves, or keeping our bison home on our preserves when they would just as soon wander from Canada to Mexico as they evolved to do. However, unlike when I was at play in the metaphorical fields of the law, now I play in real fields, and when I accomplish something it stays “done.” Fix the fence and the pronghorn are safe, feed the bison and they stay home, but most importantly, when SPLT buys land there is no longer any need to worry about whether wildlife will come first in the land manager’s calculations.

Maybe a better way to explain why I love working for SPLT is with a short story that might make sense to any long-time Colorado Front Range resident like me. Last Sunday I had another of those recurring, melancholy, experiences that I am sure anyone who has ever lived in the same spot for many years, pretty much anywhere in America, might have all the time, if they think about these things.

My daughter and I drove south along Interstate 25 from Denver to visit my mother in Castle Rock. I remember that same drive from the ‘60s and ‘70s, when Denver and Castle Rock were actually separate places, with prairies and wooded hills between them, and the freeway had far fewer lanes. Even in the ‘80s, before the “Highlands Ranch” development was built, that stretch of prairie was an actual cattle ranch and a place where my high school friends and I went exploring – through extensive prairie dog towns, watching for snakes and horned lizards the whole time.

In the ‘90s, as Highlands Ranch started to fill in with houses, I remember a herd of pronghorn that lived there. That herd was as large as 50 animals sometimes. I can still remember watching a family of coyotes on their den in a creek bank in that area one afternoon. The pups were just starting to venture out of the den, clumsily, and both parents were keeping a watchful eye. Then a buck and doe pronghorn wandered by and the buck chased all the coyotes back into their den. One of the adults tried to come back out, but the buck just lowered his head and “charged” the coyote right back in – and those coyotes stayed in, at least till it got dark and the pronghorn had long since left. That location is now just a thin ribbon of channelized “creek” passing through tracks of eerily similar houses, and the last half dozen members of that pronghorn herd were killed in the road, all in a batch, one night while trying to cross. I found their splattered corpses one morning and dragged them to the side. As it turned out, both the pronghorn and the coyotes I used to enjoy had bigger enemies than each other: us.

These sorts of memories are common for me and I could go on and on, but that is not the point. What struck me about our drive last Sunday is that the same thing is now starting to happen to my eighteen-year-old daughter. We drove through an area that used to be a large prairie dog town. The prairie dog town had been destroyed a few months ago as earthmovers completely re-contoured the landscape, removing hills and creeks and re-arranging them in new patterns in keeping with some developer’s “master plan.” Then we saw a herd of elk attempting to graze on a very small patch of prairie grass that the earthmovers hadn’t reached yet. My daughter remembered this elk herd because four or five years ago when she used to play soccer on a nearby field, it was always covered with elk poop, and occasionally the elk themselves. She realized “her” elk herd, just like “my” pronghorn herd in the past, would soon be gone and it made her sad. We stopped to watch the elk graze for a while until someone in a BMW SUV started honking at us. My daughter asked why some people simply can’t stop whatever it is they are rushing about doing and appreciate wildlife for a minute or two. I wondered yet again how to remedy, the now multi-generational, sense of loss my daughter and I were sharing. I thought for just a second and said – “well, that is why I went to work for SPLT.”